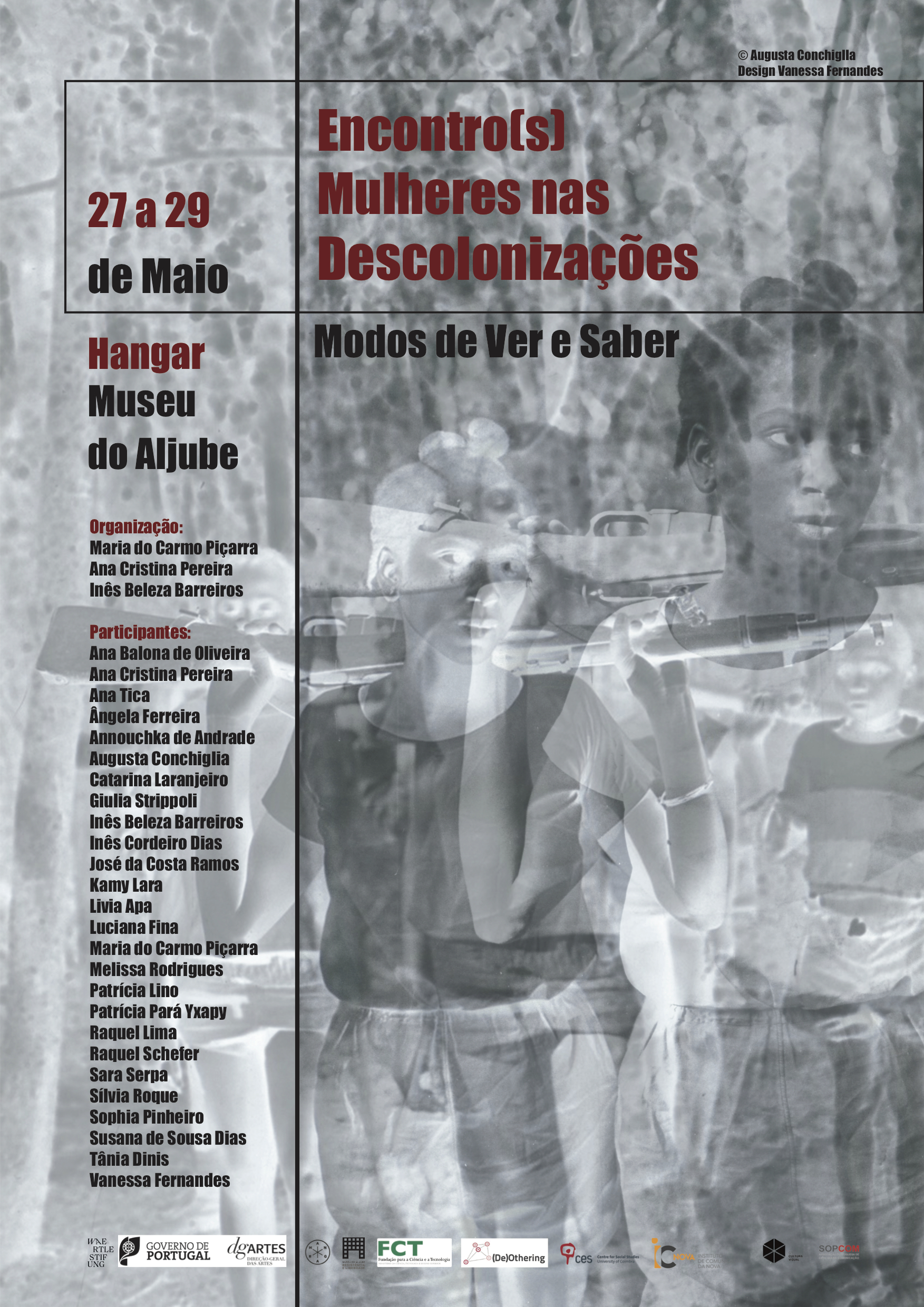 This project, GENDERIND DECOLONIZATIONS: WAYS OF SEEING AND KNOWING, consists of facilitating a circle of women (for women) of different backgrounds, origins and generations to discuss, in a horizontal and interdisciplinary way, the role of women filmmakers, artists and scholars in the decolonization processes, past and present. It will take place on January 28th, 29th and 30th 2021 at Museum of Aljube- Resistance and Freedom and Hangar – Artistic Research Center, in Lisbon.

We are calling this event “gathering(s)” to emphasize its nurturing and supportive nature:  an environment in which women can be held, heard, and seen without being often interrupted by violent criticism that generally still subsume academic and artistic events.
In these uncertain times and faced with a challenging present, our goal is not only to bring awareness to the many processes of decolonization, past and present, in which women were/are full participants, but also to test and put into practice uncharted ways of knowledge production and knowledge sharing.

Departing from a specific set of questions asked to each participant – (1) what moved you towards your research/artistic project/film, (2) why this particular topic, and (3) why this particular method/media/procedure – these gatherings are set to reflect on decolonization as an incomplete project and to contribute to Portugal’s current decolonization processes of the imagination, the writing of history, the public sphere, the arts and the academia.

The event will gather historical, theoretical and artistic contributions that reevaluate the role of women in the imagination of colonialism in Portuguese-speaking countries, once the contributions of women to decolonization processes or the perspectives of women involved in anti-colonial movements or even women who were part of the colonial authority structure are rarely spoken of. No history of decolonization or of decolonizing praxes is ever completed without paying attention to gender.
In the context of the internationalism that was the backbone of liberation struggles worldwide, women used images – mostly photography and film – as a weapon. In a certain way, this political engaged praxis was a response to the use of images by political propaganda, which very much sustained the colonial order and ideology. In Portuguese-speaking countries, among the women who photographed or made films for political purposes, the names of Augusta Conchiglia, Margaret Dickinson, Ingela Romare, Sarah Maldoror and Suzanne Lipinska stand out. The filmed materials – and not just the ones women authored – were given meaning by film editors Jacqueline Meppiel, Cristiana Tullio-Altan or Josefina Crato.

Some of questions that will be discussed are: How did women view the liberation struggles in the former Portuguese colonies? How were their ways of seeing integrated or not in the imagination of colonialism? Was there a specific gaze to women over the liberation struggles? What knowledge and awareness do we have of/about these ways of seeing? And how do these ways of seeing intersect with those of contemporary filmmakers, artists, curators and academics who are now questioning public and private archives, are visually recreating their memories or re-imagining colonialism? What role academic research, archive conservation policies, programming and curatorship have in questioning or prolonging (official) “politics of memory”?