Carla Baptista, NOVA FCSH / ICNOVA, will moderate the thematic seminar on Identidades Sociais nos Media Digitais: uma abordagem sociológica / Social Identities in Digital Media – a sociological approach, at the 6th Student Seminar of the Postgraduate Program in Sociology at the University of São Paulo. The seminar will be broadcast live via Google Meet on November 19th (Thursday), at 6:00 pm (Portugal), with the participation Allan Herison Ferreira and Ana Carolina Trevisan, ICNOVA PhD candidates in Communication Sciences. Those interested in joining the audience must register by Nov. 15 at: https://docs.google.com/forms/d/1Hrv9pmIj3D0_M-2IzYeWnAIsdAYkmCczVR9WJAygMxs/edit  Other virtual seminars will take place as part of the event from November 16-19th, including those on the following topics:

1) Sociology of African Literatures;
2) Sociology of Peripheral Intellectuals;
3) Circulation of Ideas and Intellectual History in Latin America;
4) Mobilization, Countermobilization and Conservative Culture in Brazil;
5) Education and the Economy: tensions between economics and academia in contemporary Brazil;
6) Between violence and criminalization: mass punishment and incarceration in contemporary Brazil;
7) Common sense in sociology;
8) Elites, forms of domination and their dialogues in Latin America;
9) Social dentities in Digital Media – a sociological approach;
10) Bodies in and on networks: self-representations, resistance and the medicalization of life;
11) Popular music: trajectories and criticism;
12) World of work in transformation: organization of workers and public policies;
13) Globalization, workers and union responses from local to global;
14) Frontiers between the the private and the public: investigating elites and new dynamics between capitalism and the State in Brazil;
15) Debates on Brazilian social thought;
16) Gender and non-human agencies: the place of things in the (re) definition of feminine and feminism;
17) Art in the second half of the 18th century;
19) Women in poverty: money, care and autonomy;
20) Interactions between social movements and the State in contemporary Brazil: case studies. Seminar dates will be available on the event’s Facebook page: Student Seminar the 3rd Audiovisual Festival of NUPEPA / ImaRgens do LAPS (USP) and ICNOVA (NOVA).

There will also be two days of a film showings, Nov 12-13 with sixteen films and four photographic sequences, followed by an awards day on November 17th.  Voting audience members must register by November 11th at: 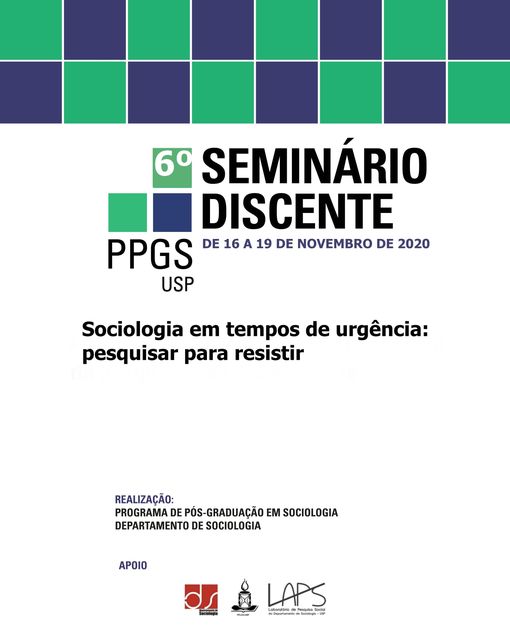