The call for papers for the “Habitual New Media” Journal of Communication and Languages was extended until May 30. This issue is edited by Madalena Miranda (ICNOVA) and Ilo Alexandre (ICNOVA). 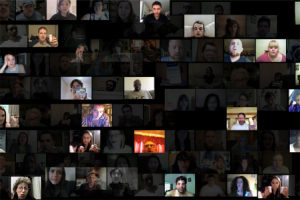 “What it means when the media moves from the new to the habitual—when our bodies become archives of supposedly obsolescent media, streaming, updating, sharing, saving.”

Wendy Hui Kyong Chun, in Updating to Remain the Same (MIT Press, 2016), argues that our media “become more important when they appear to be of no importance – when they move from the ‘new’ to the ‘habitual’”. Technologies such as smartphones are no longer surprising to us, they have been absorbed into our lives in such a way that “we become our machines: we transmit “live”, update, capture, share, connect, save, delete and track”(from the introduction).

Chun interprets the  incorporation of social networks in our habits as a defining concept of the present. “Networks have been central to the rise of neoliberalism, replacing ‘society’ with groups of individuals (…) Habit is central to the inversion of privacy and advertising that drives neoliberalism and networks”. It is in this field, for example, that Natalie Bookchin’s artistic work expands individual expressions that embody this paradoxical intimate exposure in the visual digital flow.

The issue of “habitus”, as a concept like in Pierre Bourdieu, places it in a more general social context, foreshadowing and consolidating the influence and complexity of the media in our lives, making them as omnipresent as almost involuntary. Roland Barthes, in the face of photography, in his idea of ​​the invisibility of the signifier, also reveals a notion of  “habit”. Pedro Miguel Frade in “As Figuras do Espanto” (ASA, 1992) reminds us of a moment when photography was still a technology that caused strangeness, where thinking “the modernity of the gaze” was also a “continuous and cumulative effect” (p.7) of what tends to remain obscure. Cultural technologies can be paradoxically surprising when viewed from the perspective of novelty or persistence.

The collective awareness of the political uses of new “habitual” technologies precipitated the first digital social movements of the 21st century ten years ago, such as the “Arab Springs”, “M12M” in Portugal, “Movimiento 15M” in Spain, or “Occupy WS Movement ” from New York, USA (Castells, 2013). Smartphones, “internet cafes” connected with digital social networks spread tweets, images and videos on YouTube, based on participatory structures, making them political and destabilizing a global order with their protests. These movements surprised and liberated digital practices, as the reactivation of Ivan Illich’s concept of “vernacular” (Illich, 1980), by Peter Snowdon in “The people is not an image – Vernacular Video after the Arab Springs” (Verso Books, 2020) that punctuated  a moment in recent digitally mediated History. Since then, paradoxical digital lives have evolved and “habitual new media” complexified.

However, with the pandemic moment, contemporary modes of existence have raised such mediations as globally evident. The weaknesses exposed in real and organic life now appear to be mediated in the coexistence, but also in communication and even in the hypothesis of contact, through digital existence and technological mediation of the “habitual new media”. In the context of the pandemic, “life on screen” becomes the canon of contemporary existence.

This number seeks to collect contributions on:

Articles can be written in English, French, Spanish or Portuguese and will be subjected to blind peer review. Visual essays will also be accepted. Formatting must be done in accordance with the journal’s submission guidelines and the submission via the OJS platform by May 30, 2021.

Guidelines for submission and instruction for authors:

Up to 12 pages. The essay can be entirely visual or combine image and text. The visual element of the essay must be an integral part of the argument or the ideas expressed and not serve as an example or illustration of them. It must also include an introductory text (150-300 words) integrated with the essay and its relevance in the context of this issue. Particular attention should be given to the layout of images/texts: the essay should include a PDF file with suggested layout for 17 × 24.5cm and image resolution of at least 300ppi.